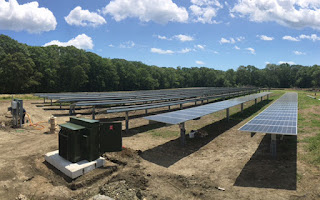 As more homes and businesses install renewable energy projects, communities wil
generate more of their own local power via solar and wind, potentially reducing demand on the electrical grid. This could mean less need to build poles, wires, and grid infrastructure, saving millions of dollars in costs.

To test this concept, the Office of Energy Resources ran a pilot project in the Rhode Island towns of Tiverton and Little Compton to understand how solar power could mitigate the need to build costly utility infrastructure to meet growing energy demand.

OER launched Solarize campaigns in the two towns which offered competitive tiered pricing to promote the adoption of solar while driving down the costs for all participants. Extra incentives were available to those who installed westward-facing solar panels to generate more electricity at a critical time of peak demand. OER also awarded a grant to a larger “tracking” solar project that changes orientation throughout the day to maximize solar output.

OER worked with National Grid and consultants to evaluate the performance of the solar projects in the two towns over time. The study, which ended this year, revealed that the solar projects successfully increased production during periods of high electricity demand, however, maximum summer peaks still occurred late in the day relative to solar output. These findings are significant because they show that renewable energy can save money not only for system owners, but the entire electric grid system as well, lowering infrastructure costs for all ratepayers. In the future, technologies such as energy storage are expected to help supplement solar energy and extend its benefits after the sun sets.