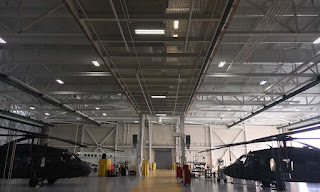 The Rhode Island Army National Guard (RIARNG) has been busy since 2016, replacing inefficient, dated lighting with state-of-the-art LED fixtures in its facilities statewide.

The new LED fixtures feature occupancy and daylight sensors to ensure that they are turned off when they are not needed to help conserve energy.

The first two facilities, completed in 2016, decreased their energy use by 44 percent compared to the baseline year, and have resulted in a 34 percent reduction in energy costs. RIARNG is also planning on converting three other facilities within the coming months, and is going to be completing a full exterior lighting retrofit on its largest site, the Camp Fogarty Regional Training Site, located in East Greenwich.

RIARNG utilized funding from multiple programs including the Rhode Island Public Energy Partnership, as well as incentives from National Grid to reduce the cost of its projects.