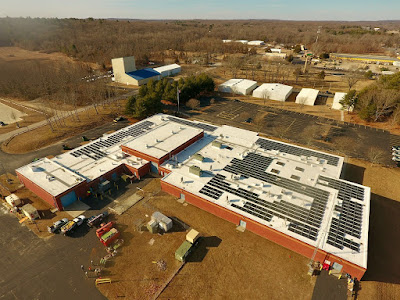 The Rhode Island Army National Guard (RIARNG) completed the interconnection of its rooftop solar facility on the 56 Troop Command Armory Building at Camp Fogarty in East Greenwich. The $335,000 project is expected to generate $45,700 in annual energy savings. The 207kW solar facility is the largest rooftop solar array on a state facility in Rhode Island and is the ninth solar project contributing towards the state’s Lead by Example Initiative.

As one of the most critical facilities for the RIARNG, the armory houses several units that respond to natural disasters, pandemics, state of emergencies, and other critical events. With the building’s brand new, flat roof and location free from shade, the armory was the perfect location for the RIARNG’s first solar project.

In the last several years, the RIARNG has implemented several energy-related projects, including converting several facilities from oil or propane to natural gas, upgrading equipment to energy efficient systems, and LED lighting retrofit projects. In addition to the 207kw system, RIARNG is also in the process of procuring a 550kw system for their Combined Support Maintenance Shop at Camp Fogarty. The hope of implementing these solar projects is to eventually install storage components that will allow the facilities to run off electricity generated by the panels during power outages and natural disasters, so that RIARNG units can continue their missions without disruption.

Resiliency is important to the RIARNG, and implementing renewable energy will allow the organization to become more resilient. “The installation of a 207 kW-DC solar array on Camp Fogarty Armory made good organizational sense,” said COL Sean McKiernan, CFMO. “The array is the largest rooftop solar array the State of Rhode Island has installed on a state facility to date. As the RIARNG looks to the future, there are plans to construct a 550 kW-DC solar array in the fall of 2020, which will continue to advance the RIARNG closer to the Governor’s goal for a 100% renewable energy future. We all have a responsibility to safeguard our environment and serve as an example for others to follow.”

Providence-based Newport Renewables installed the net-metered solar array with its in-house team of electricians and renewable energy professionals. The company was also behind the three building installation on Capitol Hill administration buildings in 2018.